Twitter and Facebook said their decisions to limit sharing of a New York Post article were meant to slow the spread of potentially false information.Denis Charlet/AFP via Getty Images

Both social media companies said the moves were aimed at slowing the spread of potentially false information. But they gave few details about how they reached their decisions, sparking criticism about the lack of clarity and consistency with which they apply their rules.

Facebook was limiting distribution of the Post‘s main story while its outside fact-checkers reviewed the claims, spokesman Andy Stone said. That means the platform’s algorithms won’t place posts linking to the story as highly in people’s news feeds, reducing the number of users who see it. However, the story has still been liked, shared or commented on almost 600,000 times on Facebook, according data from CrowdTangle, a research tool owned by the social network.

Stone said Facebook sometimes takes this step if it sees “signals” that something gaining traction is false, to give fact-checkers time to evaluate the story before it spreads widely. He did not give more detail on what signals Facebook uses or how often it takes this approach.

Twitter went further. It is blocking users from posting pictures of the emails or links to two of the New York Post‘s stories referring to them, spokesman Trenton Kennedy said, citing its rules against sharing “content obtained through hacking that contains private information.”Article continues after sponsor messagehttps://tpc.googlesyndication.com/safeframe/1-0-37/html/container.html 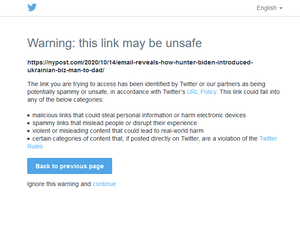 Twitter showed a warning screen to users who clicked on links to the New York Post‘s story.Screenshot by NPR

Users who try to share the links on Twitter are shown a notice saying, “We can’t complete this request because this link has been identified by Twitter or our partners as being potentially harmful.”

If a user clicks on links already posted on Twitter, the user is taken to a warning screen saying, “this link may be unsafe,” which they have to click past to read the story. Twitter also required the New York Post to delete its tweet about the story.

Twitter said it decided to block the links because it couldn’t be sure about the origins of the emails. It said its policy “prohibits the use of our service to distribute content obtained without authorization” and that it doesn’t want to encourage hacking by allowing people to share “possibly illegally obtained materials.”

But the company declined to comment on how it had reached that decision or what evidence it had weighed about the emails in the Post‘s stories.

The company later gave an additional explanation for why it was blocking the stories.

Its safety team said in a tweet that the images of emails in the articles “include personal and private information — like email addresses and phone numbers — which violate our rules” against unauthorized sharing of such details.

CEO Jack Dorsey acknowledged that the company’s communication about why it was blocking the articles “was not great.” He tweeted that it was “unacceptable” to prevent people from sharing “with zero context as to why we’re blocking.”

Asked for comment about the social networks’ actions, New York Post spokeswoman Iva Benson referred NPRto an article by the paper’s editorial board.

“Our story explains where the info came from, and a Senate committee now confirms it also received the files from the same source,” the editorial said. “Yet Facebook and Twitter are deliberately trying to keep its users from reading and deciding for themselves what it means.”

Twitter and Facebook have been acting more aggressively in recent weeks to curb the spread of false claims and manipulation related to the election, as part of efforts to avoid a repeat of 2016, when Russian-linked actors used social media to target American voters.

Facebook has been warning about the possibility of “hack and leak” operations, where stolen documents or other sensitive materials are strategically leaked — as happened in 2016 with hacked emails from the Democratic National Committee and Hillary Clinton’s campaign.

But the companies’ moves on Wednesday drew criticism from some experts, who said Facebook and Twitter needed to more clearly explain their policies and how often they apply them.

“This story is a microcosm of something that I think we can expect to happen a lot over the next few weeks and, I think, demonstrates why platforms having clear policies that they are prepared to stick to is really important,” said Evelyn Douek, a Harvard Law School lecturer who studies the regulation of online speech.

“It’s really unclear if they have stepped in exceptionally in this case and, if they have, why they’ve done so,” she said. “That inevitably leads to exactly the kind of outcry that we’ve seen, which is that they’re doing it for political reasons and because they’re biased.”

Republicans seized on the episode as proof of their long-running claims that the social networks censor conservative voices. There is no statistical evidence to support those claims.

Trump tweeted that it was “So terrible that Facebook and Twitter took down the story,” although Facebook did not remove it from its platform. “REPEAL SECTION 230!!!” he wrote, referring to a long-standing legal shield that protects online platforms from being sued over what people post on them and says they can’t be punished for reasonable moderation of those posts. Trump has repeatedly called for Section 230 to be revoked.

Sen. Josh Hawley of Missouri sent letters to the CEOs of both Facebook and Twitter on Wednesday pressing them on the decisions to reduce distribution and block the story.

The Senate Republican Conference, which is led by Sen. John Barrasso, R-Wyo., tweeted, “see you soon, @jack,” with an image of the Post‘s story. Twitter CEO Jack Dorsey is scheduled to testify, along with Facebook CEO Mark Zuckerberg and Google CEO Sundar Pichai, before the Senate Commerce Committee on Oct. 28 — just six days before the election. The topic: Section 230.

NPR is your trusted source for reliable reporting and thoughtful analysis on the 2020 election. Through Election Day and beyond, we will be here, delivering the news, providing context and keeping you updated on everything that is happening. It’s all possible because of donations from people like you. That’s why we’re asking you to donate to your local NPR station today. Will you chip in?DONATE NOW

Power Of The Petition: Nonprofit Helps Front-Line Workers Fight For Their Rights

He’s Part Of The 1%. And He Thinks His Taxes Aren’t High Enough

‘Who’s Had It?’ Back On Trail, Trump Touts His Own Bout With The Coronavirus

Water Or A Sports Drink? These Brain Cells May Decide Which One We Crave

Follow live election coverage and get in-depth analysis by subscribing to the NPR Politics Newsletter.