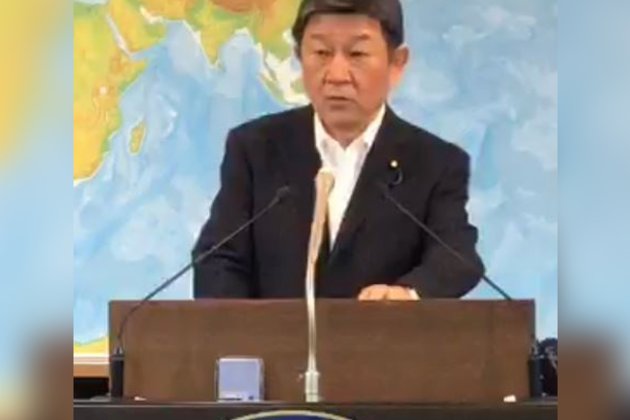 Tokyo [Japan], November 28 (ANI): Japanese Foreign Minister Toshimitsu Motegi on Friday rejected his Chinese counterpart Wang Yi’s recent public remarks claiming Beijing’s sovereignty over the Tokyo-administered Senkaku Islands in the East China Sea as “totally unacceptable.””The Senkaku Islands are without doubt our country’s inherent territory historically and under international law,” Motegi told a parliamentary committee, following criticism by some ruling party lawmakers that he took no action when Wang Yi, during a visit to Tokyo, made the territorial claims at a joint press event on Tuesday, reported Kyodo for South China Morning Post.

Motegi made the comments condemning Wang’s remarks in the Diet in response to ruling Liberal Democratic Party lawmaker Hiroshi Yamada, who asked why the minister did not immediately respond to the remarks in the press event.

Motegi informed that during talks with Wang, he strongly urged China not to take actions such as sending official ships into Japanese territorial waters or having them come in contact with Japanese vessels in the area.

He said that he also again made the request after the joint press event, during which the two ministers made statements but did not take questions.

According to South China Morning Post, a Japanese foreign ministry official said on Thursday that protocol rules prevented Motegi from commenting on Wang’s assertion at the event, known as a joint press availability, as each minister had only one chance to speak and Motegi had spoken first.

Wang was on a two-day visit to Japan.

When it was his turn to speak, Wang said China will ‘safeguard China’s sovereignty’ over the islands and justified Beijing’s sending of official vessels to the area, saying, “unknown Japanese fishing vessels entered the waters of the Diaoyu Islands.”At Tuesday’s talks, Motegi and Wang remained apart over Tokyo’s concerns about Beijing’s attempts to undermine Japan’s control of the Senkaku Islands, which China calls Diaoyu, reported South China Morning Post.

The Japanese government maintains the islands are an inherent part of Japan’s territory, in terms of history and international law. It says there is no issue of sovereignty to be resolved over them.

China has also been increasing its maritime activities in both the South China Sea and the East China Sea over the past few months, partly in response to Beijing’s concerns over the increasing US military presence in the region because of escalating Sino-US tensions.

Beijing’s rising assertiveness against counter claimants in the East and South Sea has resulted in unprecedented agreement across the Indian-Pacific. (ANI)

You Might Also LikePeople Are Becoming Rich Thanks to This Bitcoin SystemSponsored LinkHarvard Study Reveals the Ingredients to True HappinessSponsored Link10 Animals That Will Go Extinct Before Your Children Grow UpSponsored Link
‘It Just Goes Kablooie’ – Boy Describes First Kiss in Funny VideoSponsored LinkHow CBD Oil ‘Healed Her Pain’ When Nothing Else HelpedSponsored LinkAll Natural CBD Oil Has Doctors Throwing Out PrescriptionsSponsored Link
What Is Your Third Eye & What Does It Do?Sponsored LinkGetting Rich With Bitcoin, Without Even Buying BitcoinSponsored LinkOregon Don’t Buy CBD Oil Until You Read ThisSponsored Link