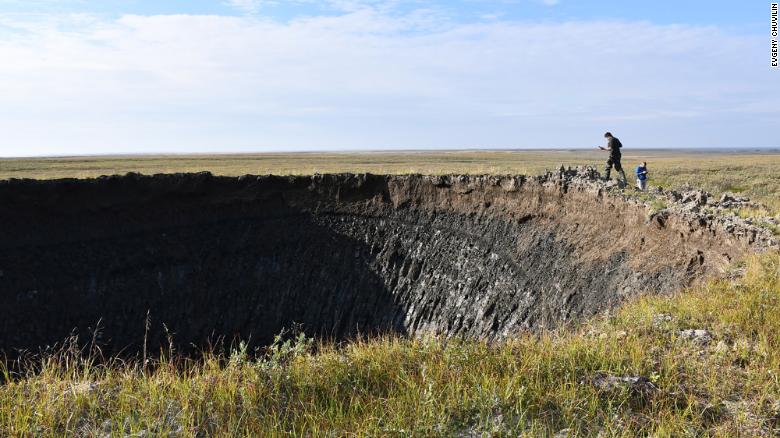 In August 2020, the RAS Institute of Oil and Gas Problems, supported by the local Yamal authorities, conducted a major expedition to the new crater. Skoltech researchers were part of the final stages of that expedition. Credit: Evgeny Chuvilin

The future of climate change is here, scientist warns 03:42

(CNN)A Russian TV crew flying over the Siberian tundra this summer spotted a massive crater 30 meters (100 feet) deep and 20 meters wide — striking in its size, symmetry and the explosive force of nature that it must have taken to have created it.Scientists are not sure exactly how the huge hole, which is at least the ninth spotted in the region since 2013, formed. Initial theories floated when the first crater was discovered near an oil and gas field in the Yamal Peninsula in northwest Siberia included a meteorite impact, a UFO landing and the collapse of a secret underground military storage facility.While scientists now believe the giant hole is linked to an explosive buildup of methane gas — which could be an unsettling result of warming temperatures in the region — there is still a lot the researchers don’t know.Content by CNN UnderscoredHow to sell your old tech before it loses its value.CNN Underscored partnered with Decluttr to create this content. When you make a purchase, CNN receives revenue.