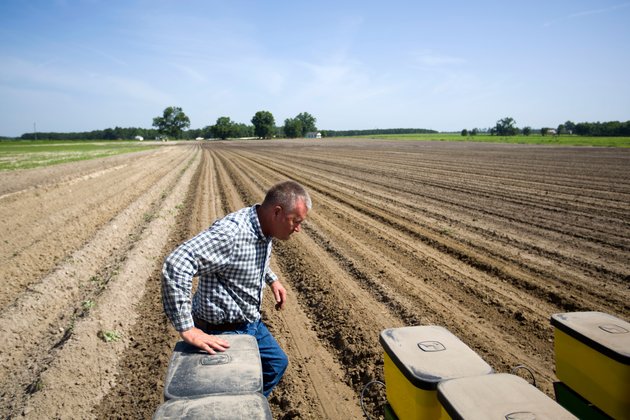 ROSEVILLE, ILLINOIS – When he set out to plant his crops earlier this year, Illinois farmer Ron Moore was preparing for another year of trade uncertainty with China, one of the largest purchasers of the more than 300 hectares of soybeans he grows on a family farm he has tilled since 1977.

The year 2020 would prove to be unlike any growing season Moore had witnessed. A global pandemic upended the food supply chain, pushing down wholesale prices for livestock and the foodstuffs they consume.

The U.S. Department of Agriculture (USDA) reported a 35% drop in soybean prices that coincided with a multiyear trade war with China that saw Beijing turn increasingly to Brazil and other U.S. competitors for the staple. The pandemic reduced Chinese purchases even further.

“It was a double whammy, so to speak, and we were terribly affected by the pandemic in the livestock and grain industry,” Moore said.

Despite such hardships in recent years, polls show a majority of American farmers remain loyal to President Donald Trump. While Trump has slipped in recent national surveys, he retains core support among farmers who praise his administration for aggressive federal measures that have helped them survive adversity.

For many, the challenges continue. Some 30 kilometers from Moore’s operation, farmer Wendell Shauman has seen prices for corn, one of his primary crops, fall 44% since 2014. Hopes for a rebound in 2020 have been dashed.

“It’s been a pretty ugly year pricewise,” Shauman said. “Most of what I’ve sold is way below what I’d hoped for.”

Keeping farmers afloat, according to Moore and Shauman, are payments since 2018 from the USDA’s Market Facilitation Program to compensate them for losses suffered as a result of foreign tariffs and the erosion of export markets.

“While it wasn’t make or break, it was a big help,” Shauman told VOA. “I’m sure there are people that wouldn’t have had anything to eat if it didn’t happen.”

“It gives us a lifeline,” Moore said. “We’re still treading water. We need more profitability and better markets to get out of the water and get on dry land. When government intervenes into our marketplace, I believe it’s up to the government to find solutions to bring our market back to where it was before they intervened.”

The USDA unveiled a $19 billion aid package earlier this year as the pandemic constricted the nation’s food supply. Another round of $14 billion in agricultural assistance followed last month.

“We’ve been able to stem the tide of farm bankruptcies,” Nielsen told VOA, speaking from Bloomington. “Farmers, while they haven’t been spending extravagantly, they’ve been able to pay for feed, seed and fertilizer to get another crop in the ground.”

While grateful for the assistance, Shauman said the program can’t go on forever.

“We’ve increased the debt a huge amount in a very short amount of time, almost in a World War Two type of crisis. There’s not enough money for the government to just keep giving everybody a living,” he said.

Hoping for a semblance of normalcy

Meanwhile, a few encouraging signs have emerged. China recently increased purchases of U.S. grain products, modestly boosting prices. Continued testing of coronavirus vaccines gives farmers hope that the pandemic will ebb and the domestic market for foodstuffs will return to some semblance of normalcy in the year to come.

For now, with weeks to go before the Nov. 3 presidential election between Trump and Democratic challenger Joe Biden, Shauman holds out hope for a permanent U.S. trade agreement with China. He believes Trump’s trade battles with Beijing will benefit farmers in the long run and that the president has demonstrated he understands their plight.

“The way he treated farmers and kept us going, that didn’t have to happen,” Shauman said. “It’s pretty surprising for a guy who has a New York history and knows very little about agriculture to be as supportive of agriculture.”

He added, “I like what he’s done. I don’t like the way he talks sometimes. I get frustrated with that. He could have some better manners.”

But he rejects demands to overhaul the U.S. economy to combat climate change, part of the so-called Green New Deal that Biden has distanced himself from but which some Democrats support.

“I haven’t heard anybody talking about a battery-powered tractor yet,” Shauman said. “What I am going to plant with? Talk often seems nonsensical to me.”

A September poll found Trump leading Biden 50% to 33% among rural adults, with 11% undecided. In the same poll, conducted by DTN/Progressive Farmer and Zogby Analytics, 59% of farmers said they would struggle financially without the USDA’s Market Facilitation Program and the Coronavirus Food Assistance Program.

Ron Moore hopes for better times if Trump wins a second term. “We are anticipating that when we get all these trade deals in place, that will bring us from a supply-side marketplace to a demand-driven marketplace, and so that’s why, I think in lots of surveys, that’s why farmers are supporting the president in this election,” he said.

While many Illinois farmers voice support for Trump, the most recent poll in the state that includes America’s third-largest city, Chicago, gives Biden a commanding 25-point lead, 61% to 36%.

Nationally, farm and ranch operators account for less than 2% of the U.S. population, according to USDA statistics. More broadly, roughly 20% of Americans reside in rural areas.

Get a daily dose of Japan Herald news through our daily email, its complimentary and keeps you fully up to date with world and business news as well.Subscribe Now