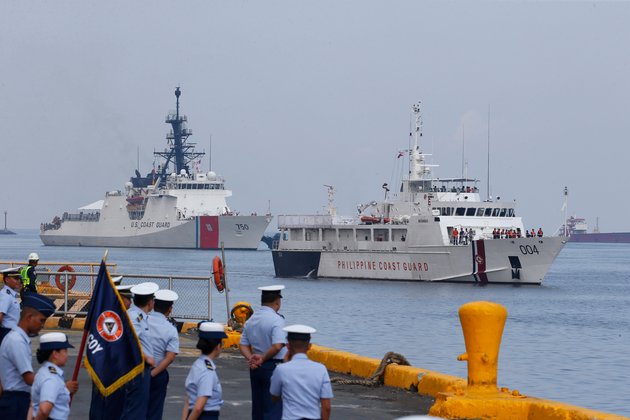 The U.S. Coast Guard is “strategically homeporting significantly enhanced Fast Response Cutters” in the Western Pacific to protect the interests of the United States and “partners in the region,” National Security Advisor Robert O’Brien said in a statement October 23. The timing is still being worked out, a U.S. Indo-Pacific Command spokesman said Monday.

Coast Guard vessels will check for any illegal, unreported and unregulated fishing that “threatens our sovereignty, as well as the sovereignty of our Pacific neighbors and endangers regional stability,” O’Brien said.

China has the world’s largest distant-water fishing fleet and its own enforcement vessels don’t always follow the fleet’s movement, Coast Guard Commandant and Admiral Karl Schultz said in October. And the U.S. plan is not just about fish, he said.

“It looks tamer [than the navy] but it also signals resolve to confront China,” said Alan Chong, associate professor at the S. Rajaratnam School of International Studies in Singapore. The coast guard, he said, “is a way of signaling presence without running the risk of triggering a shooting incident between outright navies.”

U.S. President Donald Trump’s government, enmeshed in a series of disputes with his country’s old Cold War foe, China, has raised the frequency of brief navy ship passages in a sea that China disputes with Taiwan and four Southeast Asian countries. It sells arms to some of China’s rivals in that dispute, too, and it has stepped up Asian maritime collaboration with Western allies such as Japan.

President-elect Joe Biden will keep up pressure on China after he takes office next year, analysts believe.

Brunei, Malaysia, the Philippines, Taiwan and Vietnam vie with Beijing for sovereignty in the disputed waterway, the South China Sea. Backed by the world’s third strongest armed forces, China has upset the other claimants since 2010 by landfilling tiny islets, in some cases for military use.

The U.S. Coast Guard is no stranger to Asia. Last year the cutters Stratton and Bertholf spent a combined 10 months in the Western Pacific checking on economic sanctions against North Korea and “capacity building” with fleets from Indonesia, Malaysia and the Philippines, Schultz said.

U.S. Coast Guard personnel are “doubling down with the Vietnamese” too, as the Southeast Asian country hopes to expand its coastal patrols five times, the admiral said. Vietnam regularly spars with China over maritime sovereignty, especially offshore oil.

The Coast Guard’s Munro vessel joined the Rim of the Pacific 2020 naval exercises in August with nine other nations to strengthen relationships that are “critical to ensuring the safety of sea lanes and the security of the world’s oceans,” Schultz said.

China has not responded to the U.S. plans, but the state-run China Daily news website said in August two Chinese Coast Guard vessels traveled the North Pacific to “crack down on illegal fishing.” The Chinese fleet has sent ships there since 2015.

The Chinese Coast Guard cites humanitarian rescues as a “pretext” for military activity, Chong said. But it usually keeps the navy away from disputed tracts.

“The Chinese are not putting up their grey ships up front,” said Eduardo Araral, associate professor at the National University of Singapore’s public policy school. “So, I think the U.S. is also learning from China that they don’t want to put their navy in front of the militia. It’s asymmetric, so they might as well put up their coast guard.”

Coast guards around the world normally work just to defend shorelines and nearby seas. The U.S. missions far from American waters might face legal questions eventually if they range too far, said Derek Grossman, a senior analyst with the U.S.-based Rand Corp. research institution.

“If it’s possible, it’s a great idea,” he said. “I think if China is increasingly using its coast guard and fishing militia, keeping it at that level, coast guard to coast guard, is probably a good thing to avoid escalation.”

EmailYou Might Also LikeWhat Is Your Third Eye & What Does It Do?Sponsored Link10 Animals That Will Go Extinct Before Your Children Grow UpSponsored LinkHow CBD Oil ‘Healed Her Pain’ When Nothing Else HelpedSponsored Link
30 Insanely Cool Pieces of Royal MemorabiliaSponsored LinkOregon Don’t Buy CBD Oil Until You Read ThisSponsored LinkWhy Do Cats Purr?Sponsored Link
Blacksmith ‘Proves’ 9/11 Conspiracy Theorists Are ‘Moronic’Sponsored LinkThe 6 Most Evil Stepmothers to Exist in Real LifeSponsored LinkAll Natural CBD Oil Has Doctors Throwing Out PrescriptionsSponsored Link